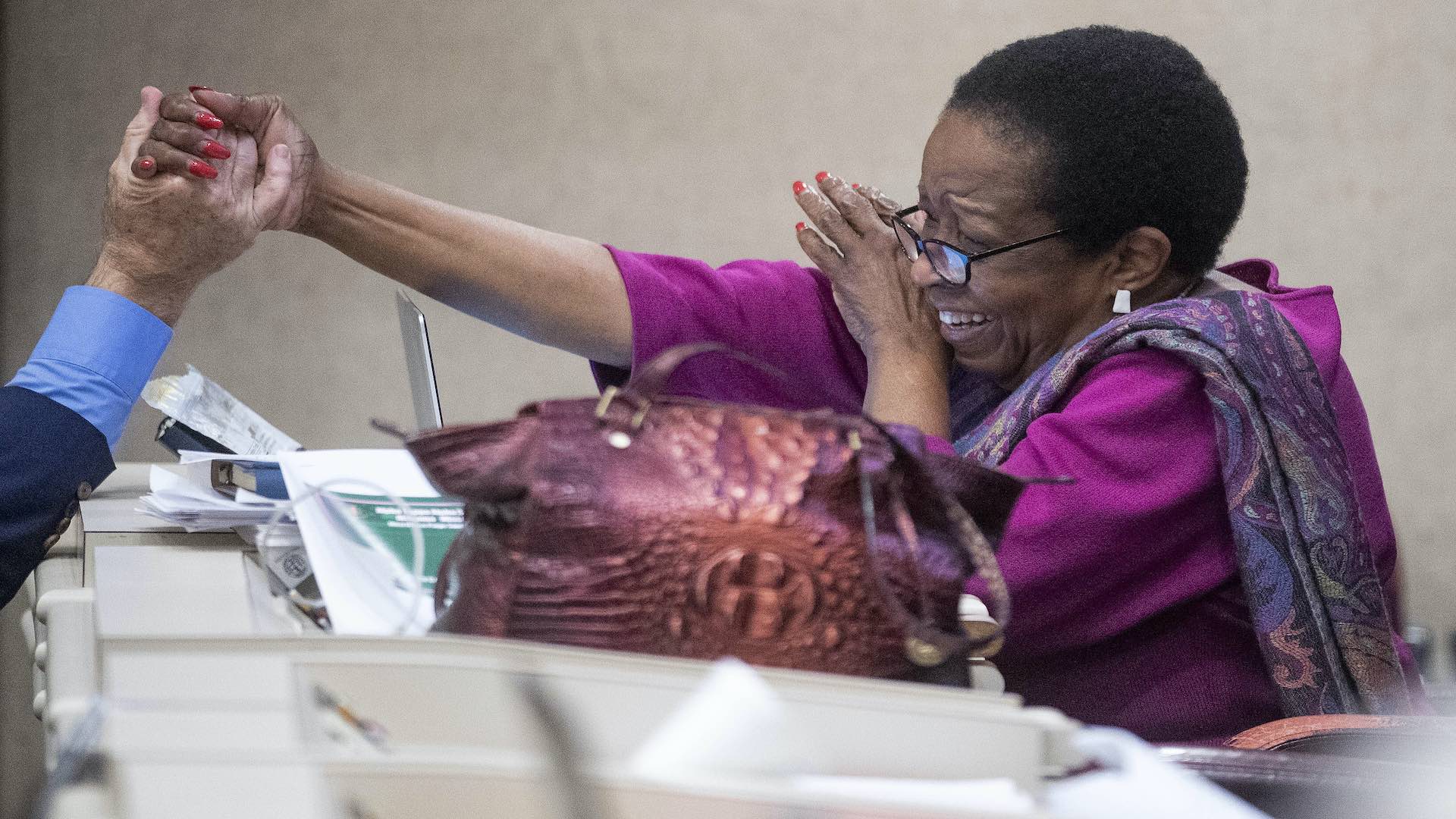 Rep. Laura Hall is congratulated after the medical cannabis bill is amended to be named after her son, during debate in the house chamber at the Alabama Statehouse in Montgomery, Ala., on Thursday May 6, 2021. (AP Photo / Montgomery, Advertiser, Mickey Welsh)

MONTGOMERY, Ala. (AP) — Alabama lawmakers overcame years of resistance and gave final passage to medical marijuana legislation on Thursday, capping a long and emotional debate in which key Republican lawmakers described switching sides in favor of the proposal.

The bill now goes to Gov. Kay Ivey, who is expected to sign it into law.

The House of Representatives voted 68-34 to pass the bill, which would allow people with a qualifying medical condition to purchase medical marijuana with the recommendation of a doctor. The Alabama Senate late Thursday voted to accept House changes and sent the legislation to Gov. Kay Ivey.

House members had been skeptical

The state Senate had already approved the bill last February by a 21-8 vote after just 15 minutes of debate. But the House of Representatives had traditionally been more skeptical of medical marijuana proposals and sent the bill through two committees before it reached the House floor.

“We appreciate the debate from the Legislature on the topic. This is certainly an emotional issue. We are sensitive to that and will give it the diligence it deserves,” Maiola said late Thursday night.

The approval came eight years after a medical marijuana bill in 2013 won that year’s so-called “Shroud Award” for the “deadest” bill of the year in the House of Representatives.

But Republican Rep. Mike Ball, who shepherded the bill through the House, said “hearts and minds” were slowly changed on the issue.

“Every year that we delay getting help to people who need it, there are more people and more people who are suffering because of it. We’ve still got another year or so before this gets set up and cranked up, but at least we have hope now,” Ball said.

More than a dozen conditions qualify

More than a dozen conditions, including cancer, a terminal illness, depression, epilepsy, panic disorder and chronic pain would allow a person to qualify. The bill would allow the marijuana in forms such as pills, skin patches and creams but not in smoking or vaping products.

Representatives voted to name the bill after the son of a state Democratic representative, Laura Hall. She had first introduced a medical marijuana bill over a decade ago after her son Wesley ‘Ato’ Hall had died of AIDS.

Representatives debated the bill for nearly 10 hours Tuesday until lawmakers adjourned shortly before midnight without a vote. House lawmakers did not meet Wednesday and representatives approved the bill Thursday after two hours of debate, before the Senate gave final approval.

The lengthy House debate brought impassioned discussion that included lawmakers expressing fervent opposition. Others spoke, however, of changing their minds on the issue after witnessing the illnesses of family members.

“This can change the quality of life for the people that we love,” said Republican Rep. Allen Farley, a former police officer.

The bill had faced an earlier filibuster from opposed Republicans, who worried that it could be a gateway to recreational use or that medical marijuana could end up in the hands of teens.

“What makes us think we know more than the FDA. My other thought is what if we’re wrong. What if we approve and pass this bill and it is a gateway like it has been for Colorado,” Republican Rep. Rich Wingo of Tuscaloosa said Tuesday.

A medical marijuana bill in 2013 won the Shroud Award for the “deadest bill” in the House.

“They laughed at me,” former Democratic state Rep. Patricia Todd, the sponsor of the 2013 bill said Thursday of the reaction she got from some Republicans at the time.

What Is 420? The Legend of the Famous Stoner Number

What is 420 if not a secret code? Much like the weed leaf, 420 is more than just a time, a date, and a corresponding

Back to the Essentials with Piper-Heidsieck

Drink Me showcases the lifestyle through the glass. Discover imbibe sensations, with daily features, guides and lists and stories on the greatest wine, beer, spirits

The Amazon marijuana policy change means employees do not have to fear firing for marijuana use and the company now supports legalization. Read more by

Rylie Maedler, 13, takes cannabis oil once in the morning, during lunch, at dinner and before bed. The Delaware teen has been taking it since she was 7 after being diagnosed with aggressive giant cell granuloma, a rare type of tumor. Rylie’s now made it her mission to help other sick kids get the medicine…