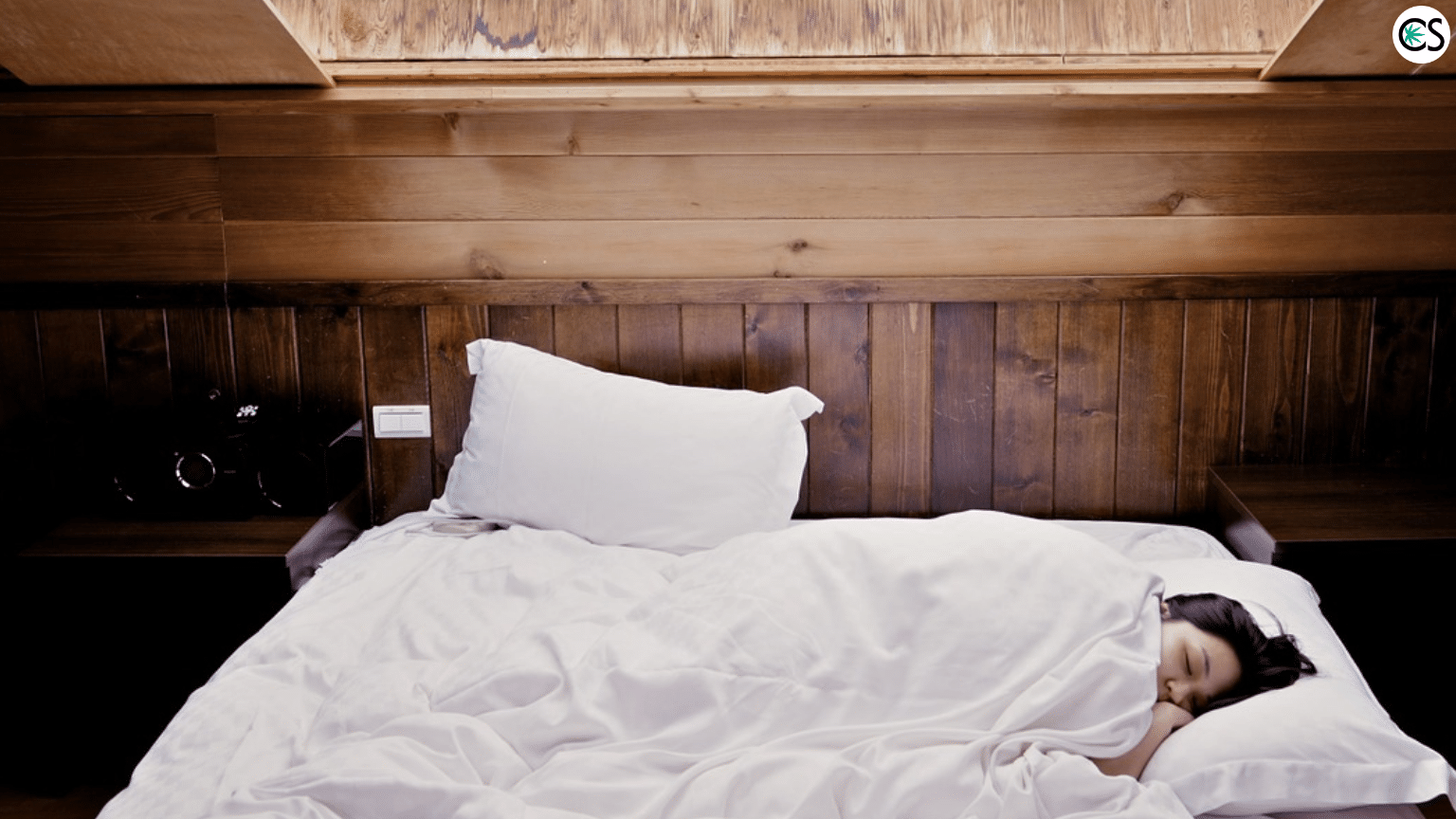 The paper goes on to state that hypnotics are often prescribed without approved indication, most often with specific contraindications, but even when indicated, there is little or no benefit to them.

It’s also suggested that the recommended doses increase sleep little if at all, and daytime performance is often made worse and not better.

Kripke also contends that the lack of general health benefits is commonly misrepresented in advertising.

What about over-the-counter sleeping pills?

They might be safer than prescription hypnotics, but they’ve still got their own set of drawbacks.

One of the main ingredients in OTC sleep medicine is antihistamine diphenhydramine. Sure, it will help you fall asleep, but it’s not a promise that the sleep you get will be peaceful.

“Usage of diphenhydramine is associated with developing Alzheimer’s disease, though which is cause and which is effect is certainly unclear,” Kripke told Project CBD.

“One well-known aspect of diphenhydramine is that it is anticholinergic [blocks the neurotransmitter acetylcholine], that produces some heart symptoms sometimes as well as digestive symptoms such as constipation. In some patients, also, diphenhydramine at night causes rather a lot of daytime sleepiness.”

OTC sleep aids can also be toxic to the liver, as they contain acetaminophen.

Not reading the warning labels on these readily available sleeping pills could prove problematic or even fatal when combined with other medications and/or alcohol.

These pills also aren’t designed to be taken for longer than two weeks at a time.

Many who take them, however, use them for far longer than a couple weeks.

Still want to reach for the Tylenol PM or that prescription sleeping pill?

Why not consider trying if cannabis can help instead?

Cannabis for Sleep: Is CBD or THC Better?

One of the biggest reasons many people report using cannabis is to help them get a good night’s sleep.

And as it turns out, people have been using cannabis for this exact reason for centuries.

In the 18th century, the celebrated medical reference book Materia Medica was published, where cannabis was listed as a “narcotica”.

When cannabis was reestablished in Western medicine by Sir William B. O’ Shaughnessy in 1843, studies were spurred that emphasized the curative properties of “Indian hemp” for sleep problems.

In 1860, German researcher Bernard Fronmueller remarked, “Of all anesthetics ever proposed, Indian hemp is the one which produced a narcotism most closely resembling the natural sleep without causing any extraordinary excitement of the vessels, or any particular suspension of secretions, or without fear of a dangerous reaction, and consecutive paralysis.”

In a study he conducted almost a decade later, Fronmueller found that out of 1000 study participants with sleep problems, Indian hemp cured 53%, partially cured 21.5%, and had little or no effect in 25.5%.

Both THC and CBD have shown to possess the ability to help improve sleep.

The way they work, however, is as different as the cannabinoids themselves.

When it comes down to it, is CBD or THC better for sleep?

Before we get deeper into that question, let’s take a look at how the endocannabinoid system plays a major role in sleep.

Sleep and the Endocannabinoid System

Were you aware that how we fall asleep, stay asleep, and wake up is closely connected to the endocannabinoid system and our own circadian rhythms?

There is actually a strong relationship between the two, which is detected in the sleep-wake cycle changes in anandamide and 2-AG, the brain’s endogenous cannabinoid compounds.

There is also a strong relationship in context to sleep-wake cycles with the enzymes that break these compounds down.

At night, there are higher levels of anandamide in the brain. This compound works with neurotransmitters in the brain to cause an individual to sleep.

On the other hand, 2-AG levels are higher during the day, which has led researchers to suggest that this compound is relevant to promoting wakefulness.

Both anandamide and 2-AG have shown to activate CB1 receptors in the central nervous system, including brain areas that are linked to sleep regulation.

Activating CB1 receptors is believed then, to be a critical component in moderating sleep homeostasis.

Both CBD and THC have a powerful effect on the endocannabinoid system.

Research on which cannabinoid is “better” is a mixed bag.

Both clinical and anecdotal evidence shows that both can be sedating or alerting depending on how much is taken.

Let’s take a deeper look at both.

CBD vs. THC for Sleep

A 1976 study found that the effects of THC administration for sleep closely resemble those of lithium.

For many people, it’s exactly the nightcap needed to help them get the sleep they need.

Aside from being sedating and helping you fall asleep faster, THC could be beneficial for sleep apnea, as evidence shows it can improve breathing during sleep.

If you’re someone who has trouble falling asleep, THC could be just what you need to fall into a deep slumber.

Here’s the thing, though.

While THC has shown to help you fall asleep faster, it also has an effect on the quality of sleep you get once you doze off.

THC has shown to alter the time you spend in the different stages of sleep, particularly reducing the time that is spent in REM sleep.

It also increases the time one spends in slow-wave sleep.

REM sleep is where we dream. Because THC reduces the time we spend in REM, it also reduces how much we dream.

For people who suffer from nightmares and unpleasant dreams, this can obviously be a tremendous benefit of using THC for sleep.

On the other hand, in REM sleep the brain processes and integrates memories and emotions, which is vital for learning and higher-level thinking.

Decreased REM sleep can result in decreased cognitive and social processing, lead to difficulty concentrating, and cause problems with memory. Not good.

Here’s something else to consider when it comes to THC and sleep. While the occasional user might find THC to be beneficial, chronic use of THC has actually shown to disrupt sleep.

A 2016 study found that daily marijuana users scored higher on insomnia severity index and sleep disturbance measures than those who did not smoke weed every day.

The study found that heavy (or daily) marijuana use is largely associated with sleep difficulties.

According to authors of the study, “Study participants who didn’t smoke every day usually smoked in the evening.

Only by stopping marijuana completely, and waiting some time without using at all, will a person be able to determine how marijuana was affecting, or not affecting, his or her sleep.”

The non-psychoactive cannabinoid is actually shown to increase wakefulness. Rather than acting like a sedative, CBD is shown to work as a wake-promoting substance.

How exactly then, can CBD help you get a better night’s sleep?

It all comes down to the way the cannabinoid works with the body’s own endocannabinoid system.

We just covered how the endocannabinoid system is intricately linked to our sleep patterns.

And as we’ve learned in the past, CBD is excellent for providing homeostasis to the endocannabinoid system.

Not only is the cannabinoid responsible for promoting wakefulness, but it’s also shown to help people fall asleep and stay asleep…as well as stay awake the next day.

Some researchers contend that CBD could actually be a powerful agent for individuals with narcolepsy or suffer from excessive daytime sleepiness.

A 2017 review found that preliminary research suggests that CBD could also have therapeutic potential for the treatment of insomnia.

The review noted that THC could decrease sleep latency but in the long-term could actually impair sleep quality.

The review also highlighted that CBD shows promise for REM sleep behavior disorder (the acting out of intense, vivid, and sometimes violent dreams).

Here’s something else. CBD is awesome for mellowing you out and helping you relax without the high associated with THC.

High doses of CBD can be too sedative for some people.

To avoid any unpleasant side effects, most people carefully start with a small serving size dose of CBD and only increase the dose gradually if needed.

Not everyone enjoys the psychoactive effects of marijuana, which makes CBD an excellent alternative.

THC can actually make you feel groggy when you wake up, but CBD is less likely to cause this side effect.

People that do use CBD for sleep swear by taking their desired serving up to 1-2 hours before bed and giving the cannabinoid time to work its magic.

When it comes to the right dose of CBD (and THC) for getting better sleep, everyone is different.

Cannabis is highly personal medicine and what works for one person, doesn’t always work for the next.

Both CBD and THC can help you get sleep.

Ultimately, that’s up to you to decide…but our research leads us to believe that overall CBD could be better.

This is especially for the majority of the population, as well as those who don’t enjoy the psychoactive effects THC contains.

Keep in mind the choice between THC and CBD doesn’t have to be mutually exclusive!

Yes, it’s true: you really can have the best of both worlds.

There’s tons of products on the market (where legal access to THC is permitted for medicinal or recreational use) which are balanced blends of THC and CBD.

CBD is known to mellow out the negative side effects people often experience with THC (anxiety, paranoia, or “getting too high”).

Full spectrum CBD hemp products are considered CBD dominant with typical ratios of 20:1 CBD to THC (or more on the CBD side).

In the end, it all comes down to getting the sleep you need.

The products which work for your situation will be unique to you.

Have you tried CBD or THC to help you sleep? If so, which do you prefer?

We’d love to hear about your experience in the comments below.

This rapper and singer is using music to promote the

Cannabis industry may finally move past cash as Democrats look

CBD: The Answer to the Opioid Epidemic? Maybe. Here’s Why

CBD for Pets: Learn More About CBD Oil for Dogs

How To Cook With CBD Isolate [Updated January 2021]

Will Topical CBD Products Cause a Drug Interaction?

CBD for Psoriasis [Q&A with Dr

How to Choose Your CBD – a brief guide

HOW TO USE HEMP SEEDS

How to make Hemp Oil Soap with Recipe

CBD for Dogs- Medical Marijuana for Dogs Studied at the University of Colorado.

Should You Try CBD for Your Pet? | Consumer Reports